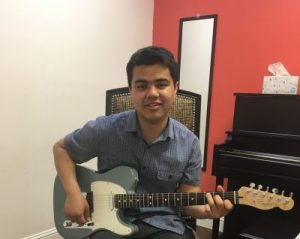 Raised in Houston, and a Berklee College of Music graduate (Boston), Mr. Erick Jaimes has been a musician for the vast majority of his life. He started playing both guitar and double bass at around age 12. During his high school years, he played double bass in his school orchestra as well as jazz guitar in the jazz band. Mr. Erick also started a band with which he composed original music, recorded two full length albums and an EP, toured around the US, and played locally. He then went to Berklee College of Music, focusing on jazz guitar and majoring in Music Production and Engineering, graduating in May of 2017. Now back in Houston, Erick is ecstatic about the opportunity to pass along all that he’s learned over the years. He also continues to perform in various different settings ranging from jazz gigs, weddings, performing original music, and more. He also works as a live sound engineer, is bilingual (English/Spanish), proficient in Portuguese and Indonesian, and continues to learn more languages.