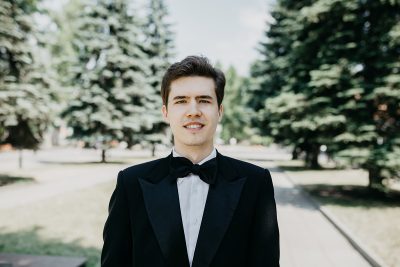 Osip Nikiforov is a Russian pianist, who studied under the tutelage of the world-renowned pianist Yefim Bronfman at Manhattan School of Music, and is a Third prize winner of the San Antonio International Piano Competition.

Born in the city of Abakan in Siberia to the family of musicians, Osip started studying piano with his father at age 6. While still living in Russia, Osip has participated and won numerous awards in national and international competitions, such as the Gold Medal at the Delphic Games in 2006 in Astana, Kazakhstan, and Third Prize at 2008 1 st International e-Piano Junior Competition in Minnesota, where at the age of fourteen he shared the prize with Jan Lisiecki. Few weeks later, he was the winner of Dorothy McKenzie Award in New York City at the International Keyboard Institute and Festival Competition.

Since 2010, Osip Nikiforov has been residing in the United States. He became a recipient of the full 2017-2019 Harold and Helene Schonberg Pianist Scholarship at Manhattan School of Music. In the summer of 2019 he was invited to close the Mozart Festival Texas with Mozart Piano Concerto #17. Osip is regularly invited to perform at concert series, including the Schubert Club Courtroom Concert Series in St. Paul, the Salon se Leve Concert Series in Minneapolis, and the Dame Myra Hess Memorial Concert Series in Chicago, which was broadcasted on WFMT radio. In 2016 along with the Third prize at the San Antonio International Piano Competition, he received the Best Performance Award for the commissioned piece written by the composer Matthew Mason. Later in the year, he became the recipient of the Adopt a Young Artist award. He is also the First prize winner of 2011 Music Teacher National Association Competition in Senior Division and the Second prize winner in Young Artist Division in 2014. In the same year of 2014, he was awarded First prize at the Schubert Club National Piano Competition.

Osip Nikiforov has graduated from Shattuck St. Mary’s School in Minnesota and the University of Minnesota, studying piano with Alexander Braginsky, the last student of Alexander
Goldenweiser. Currently, he is pursuing a Doctor of Musical Arts degree at Rice University, studying with Jon Kimura Parker. He also regularly visits his homeland to perform solo as well as with national orchestras, including recent performances of Rachmaninoff Piano Concerto #3 and Liszt Piano Concerto #2 with the Khakass Philharmonic Orchestra. In the United States Osip performed Beethoven Concerto #3 with Minnesota Orchestra. He also appeared on Minnesota Public Radio, Star Tribune, GetClassical, and Classical Connect web pages. Besides performing, Osip also enjoys making his own transcriptions for piano as well as playing solo jazz piano.